Formula 1 has been a mind game player with the teams, the drivers, & also with the fans worldwide.

Not only the change in rules, but also the points system, the fuel usage and many more changes have made this sport damn technical.

Creating a strategy per race in a different manner seems to be an uphill task for every team.

But there is one aspect that hasn’t changed over the years i.e. TEAM ORDERS..!!!

Team orders are the orders given by every team to their respective drivers during the race.

The orders can be regarding;

The above pointers look decent enough, don’t they?

But the last one is completely unacceptable.

Imagine a state, when you as a driver is trying to get more points for the team, but your team orders you to let the other team mate go ahead, on grounds of his chances being higher to win!

Isn’t that killing the confidence of a driver?

Over the years there have been many such instances, where a driver has been ordered to either let the team mate go ahead, or to hold position and not fight back.

The latest example being Felipe Massa of Williams!!

This man has been a subject of receiving such orders since his time in Ferrari.

On Sunday, he was in pursuit for the 6th spot occupied by Mclaren’s Jensen Button.  His team mate Bottas was right behind him. 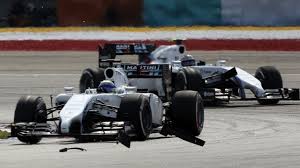 Williams ordered Massa to let Bottas go ahead as they thought he would get a better result.

But, Massa didn’t let go of his position and kept going.

That leaves us with a question.

Should drivers take such team orders?

Team orders as such ruin the sport. They also potentially rob the driver off a well deserved win.

Like the famous incident which took place last year with the Red Bull Racing team.

Mark Webber was leading the race until the last two laps, with then defending champion Sebastian Vettel behind him. 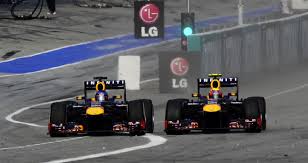 The team gave both of them orders to hold their positions till the end of the race.

Vettel however took advantage of the situation and went ahead of Webber to take the win.

Now the question of ethics comes in this situation?

Who was right? Who was wrong?

The person deserving to win was robbed off in some way due to his team’s decision!

It’s not only them but also the fault of the other driver who took advantage of this situation.

Team orders as such will always have a negative impact on the sport & thus teams should back their drivers, not create divide by such orders.