Skip to main content
With the  FIFA World Cup 2014 starting within 24 hours, a random thought passed through me.
The obvious question what we ask all our friends.
Which team you supporting?
(This question mostly applies to people whose nation hasn’t made it to the World Cup)
Mostly, the rest of the selected nations choose to cheer their own team.
In the month of June, I am so damn sure, that after every round, preferences will change.
So will the people.
The person who will change his Facebook status, Whatsapp display pics to shower love for the team he supports, will immediately  switch when he finds a better prospective team to win the title.
Thus making them what I term as, “Plastic Fans”
“Plastic” because they have no respect for the game, nor for the teams.
It’s just the winner that will matter to them.
So tomorrow they can boast that “we had cheered this team, thus they won”
Real Fans are true fans, who no matter what will support just one team.
If their team is out, they will still follow the game, but their preference doesn’t change.
Example:
I have this friend, whom I won’t name who made me realize that even plastic fans have levels of madness in them.
We friends follow the English Premier League which takes place in Great Britain.
He supported Arsenal for the first few months, then Liverpool, and then in the final 2 weeks gave his support to Manchester City, the then crowned champions.
Later when asked, he defended by saying that his love was always for Manchester City.
Hence proving, the apex level of a Plastic Fan he is.
Love and respect the game and the teams.
If you want to read about plastic fans in the world of T-20 cricket then do read a fellow blogger Karan Sampat’s take on it.
It’s been explained beautifully, and if I could not justify this concept, then I’m sure he has done it even better.
Link – http://karan-sampat.blogspot.in/2014/05/plastic-fans-new-generation.html
Agree with my view or disagree with it?
Do comment. 🙂
Firstly, Congratulations to Sri Lanka for winning the final.

Indeed the better team won.
They were,
Better on the fielding side,
Better on bowling, in fact marvelous.
Thus they won.
But, the attention was given more to Yuvraj Singh.
The man of the moment for all the wrong reasons.
I agree he has had a bad tournament.
Just a score of 60, which ironically he scored against Sri Lanka.
But they attacked every batsman with smart bowling.
Still, now all you can find are memes made on Yuvi.
Can’t we guys take a defeat in proper stride.
To state that Yuvi alone is to blame on the final, is unjust & unfair. 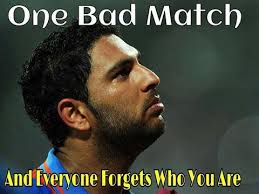 If you cricket enthusiasts watched clearly, after he became out, there wer a total of 11 deliveries bowled.
What did Kohli & Dhoni do?
Almost nothing!!
That proves how good the bowling was in the death.
But no..!!!!!
We just know one thing.
Jeeta toh pyaaar… haara toh maaar!!!
This attitude has killed one too many.
Of all I heard lately, Yuvraj’s house was on attack.
Some stones were thrown..

Is this how we treat our players.
We just can’t look at the positives can we?
Overnight, Yuvi has become famous.
I end my post with a request and some memes of him made overnight post the loss.
The request is to grow up, have the courage to bear a loss, and understand, we can’t win everyday!!
Just imagine.
below are some of the memes made overnight..
Have a look..! 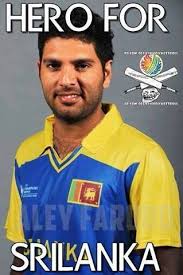